The FXB Center’s history parallels that of the HIV epidemic in the United States: by 1983 the Center, which was then based at the United Children's Hospital in Newark, had under its care 40 to 50 children who were infected with a virus that was soon to be identified as HIV. An interdisciplinary model for pediatric HIV care that was comprehensive, culturally competent, family-centered, and community-based was developed to respond to this acute community need. 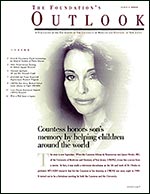 Early in the 1990s, the Center received generous funding from the Countess Albina du Boisrouvray to enhance the local clinical program and to expand the Center’s expertise to the rapidly growing HIV pandemic. Albina du Boisrouvray’s only son François-Xavier, a rescue pilot, was killed in a tragic helicopter accident when he was just 24. This life-changing loss prompted Albina to dedicate her life to champion the cause of the tens of millions of vulnerable women and children left in the wake of the devastating AIDS pandemic. In 1989, Albina founded the FXB Foundation and the FXB Association (FXB International) in honor of François-Xavier, to perpetuate the values of generosity and compassion that had guided his life, and to keep his mission alive by also seeking to rescue people – some of the poorest on the earth. In recognition of this generous award, the Center was named the François-Xavier Bagnoud (FXB) Center. Soon thereafter the Center began the International Training Program (ITP), one of the first international training programs for healthcare providers caring for pregnant women with HIV infection and perinatally-infected infants and children worldwide. From 1990–2000, this program developed customized education and training for more than 200 healthcare providers from 37 countries. The FXB Center teams also conducted in-country provider training and collaborated with in-country trainers to develop and implement curricula and support systems of care for HIV in 18 countries. Since the beginning of the HIV epidemic the FXB Center team contributed to every major development in pediatric and perinatal HIV including the landmark PACTG 076 protocol for PMTCT; the first antiretroviral treatment guidelines for children; the first international pediatric HIV training program, and the first of its kind website dedicated to collecting, reviewing and sharing state-of-the-art pediatric HIV information with providers and consumers. The transition that occurred in 1997, when United Hospital was closed and FXB Center moved to UMDNJ, led to the establishment of FXB Center as a Center of the School of Nursing.

Today FXB Center continues to expand upon its innovative programs. Led by nurse practitioners and integrated within the Rutgers Community Health Center, our HIV Clinical Practice utilizes an interdisciplinary model for HIV care that is comprehensive, culturally competent, family-centered, and community-based. The Child Health Program, a regional leader, has emerged as a national model of care for children and families involved with child welfare. This program in collaboration with the New Jersey Department of Children and Families, Division of Child Protection and Permanency (DCP&P) provides community-based, pediatric nursing case management services to DCP&P district and regional offices and the children in their care across the state of New Jersey. Since 2007, the CHP has provided nursing services to more than 50,000 vulnerable, at-risk children in foster care throughout all of New Jersey.

Funded by the New Jersey Department of Health, Division of HIV, STD and TB Services, FXB Center provides education and training for physicians and other healthcare professionals in the diagnosis and treatment of HIV. This program makes possible the planning, implementation and evaluation of a number of statewide professional development events, including the annual HIV Clinical Update, a medical update series, and New Jersey HIVLinks. HIVLinks is a semiannual electronic newsletter that includes articles on current events in the HIV, TB and STD fields. In partnership with the NJ Department of Health FXB Center staff also supports state-wide quality improvement initiatives through onsite coaching and technical assistance in response to identified areas of needed improvement and to improve reproductive health and preconception care services for people living with HIV.

We have served as the National Pediatric & Family HIV Resource Center from 1990–2002; the National Resource Center for the Ryan White Part D Network from 2002–2011; the HIV‐Medical Homes National Resource Center from 2011-2014; the National Resource Center for HIV Prevention among Adolescents from 2011-2014; the AIDS Education and Training Centers National Coordinating Resource Center since 2002 and the AIDS Education and Training Center for Northern New Jersey since 2010. The Access to Reproductive Care and HIV Services (ARCH) Program supports the development, implementation, and ongoing evaluation of a nurse-led health promotion and disease prevention program in 14 sites in New Jersey, including six sites that serve as syringe-access programs and seven additional sites located in areas of the state hardest-hit by the opioid epidemic. In its eighth year, the ARCH nurse program has demonstrated that providing healthcare services and education to clients in public health and community-based settings can be an effective mechanism to reach women and men with and at-risk for HIV and Hepatitis C infection and their partners.

Over the past 30 years FXB Center has conducted applied research with the goal of creating a lasting impact on the physical and mental health of disenfranchised groups served, led innovative programs, provided continuing education and training of health care providers working in the fields of HIV and child welfare nursing, built coalitions, and informed policy throughout New Jersey, nationally, and globally. Together, we aim to eliminate barriers to high-quality health care for those in greatest need.